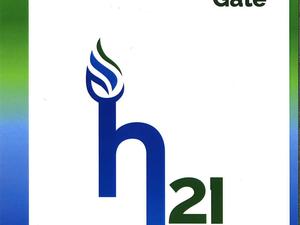 On Monday this week both Paul Needley and Claire Nequest attended the Leeds City Gate H21 Project launch in London.

The project aims to decarbonise the gas network by looking at the technical and commercial feasibility of replacing natural gas with Hydrogen. If it is a success this would greatly help the UK meet the targets set in the Climate Change Act in reducing carbon emissions by 80% from the levels recorded in 1990 by 2050. It would also put the UK on the map regarding innovation. The H21 project involves converting the city of Leeds gas network to Hydrogen instead of Natural Gas. Hydrogen when burnt does not emit Carbon Dioxide or Monoxide, it produces water as a by-product, thus greatly reducing carbon emitted into the atmosphere.

The project is being run and conducted by Northern Gas Networks under the formation of its new Leeds City Gate Team. They have published a report which examines the feasibility and viability of conducting such a project which Enertek International contributed to and are mentioned in. Enertek have experience in testing & developing hydrogen appliances and hope to be a part of the project in the future.